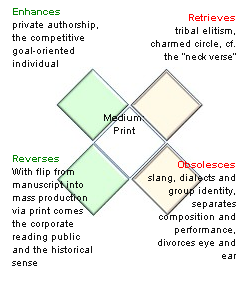 McLuhan’s tetrad-model: four aspects of the effect of media on culture and society. This example Print and the second one Xerox are quoted from “The Global Village” by McLuhan and Powers, Oxford University Press 1989.

The idea of copyright – the right to retain publication of one’s own words – is much younger than other forms of intellectual property laws. Patents to protect the economic exploitation of technological invention, for example, have been granted by the city’s sovereign since the times of ancient Greece. But not sooner than in the 18th century the perceived value added to a society and its economy by the written word would justify a legal concept to aliment writers. The first copyright law clearly formulates this goal in its title: “An Act for the Encouragement of Learning, by vesting the Copies of Printed Books in the Authors or purchasers of such Copies, during the Times therein mentioned“, also called the Statue of Anne.

Yesterday, Bruce Sterling cried out his concern about the future of literature in three Tweets:

“*Economic calamity that hammered music hits literature. The “solution” for writers? There isn’t one.
So literature collapses before our eyes, while the same fate awaits politics, law, medicine, manufacturing… finance and real estate…
Diplomacy, the military… we’re not gonna die of this, but man, the deeper 21st century looks like nothing anyone ever imagined.” (1,2,3)